The beginning, the tholeiitic period

Mount Etna is located in a geologically complex area. Its geo-dynamic outline is dominated by subduction of the African foreland and the Ionian oceanic crust under the Apennine chain. According to classic thought and the most accepted theory, Etna is located on the intersection of three important regional fault systems, the dominating tectonic alignments are of a distensive type: 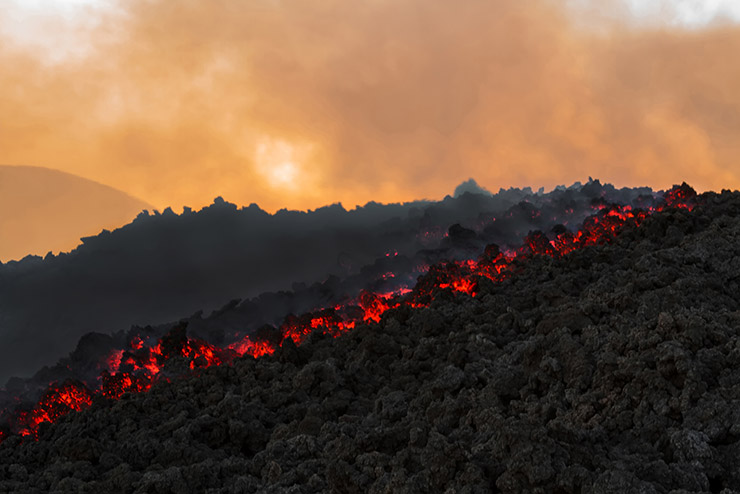 Recent geo-physical studies have re-dimensioned the importance of these systems by giving more importance to the Ibleo-Maltese fault, regarding the evolution of Etna’s magma. This fault dislocates the lower eastern section of Etna's massif by forming a series of distensive structures emphasised by escarpment, faults and steep slopes with a NNW-SSE orientation. The eastern section of the volcano is limited northwards by the “Pernicana fault” in an E-W direction. 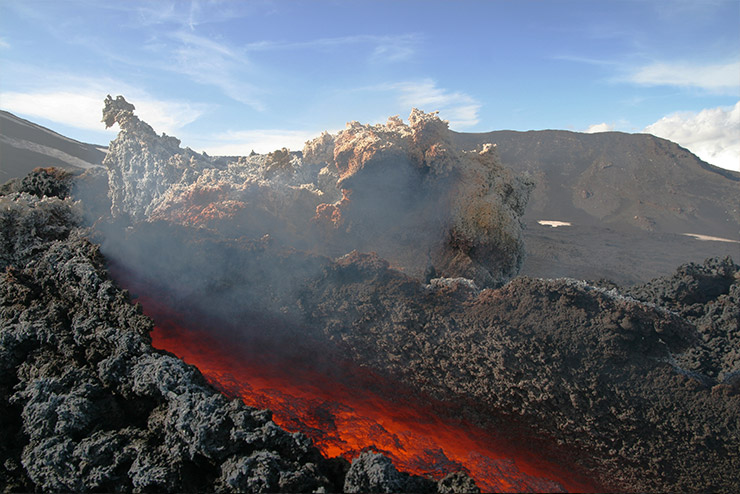 The first signs of volcanic activity around Etna occur at the base of the volcano and form the splendid “Ciclope Coast” gushes and the pillow lava along the cliff of Acicastello, but also the basalt columns gushing on the river terrace of Simeto, extending from Paternò to Adrano. The studies on the composition of this lava highlights that we are dealing with Tholeiites, i.e. magma that is similar, even if with differences, to that produced in areas where the earth mantle is characterised by high levels of partial fusion of great distensive activity, which is typical of the oceanic ridges and islands. Tholeiites form a fairly limited percentage of products from the area around Etna and were produced from fissural eruptions, often under water and on several occasions starting circa 500,000 years ago. They are in fact the oldest of Etna's products.

Following the first “Tholeiitic" period, the eruptions began in the central apparatus of real, exposed volcanoes. The products erupted during this second period present a marked chemical difference with the tholeiites. The lava is “alkaline”, defined by scientists with exotic names such as Hawaiiti or Mugeariti and even Benmoreiti. This series of names also includes the most known, but little present on Etna, basalts. The alkaline products form the great mass of Mount Etna and still erupt today. The distinctions between the terms are carried out by means of percentage ratios of certain oxides and in particular SiO2 and K2O+Na2O which are considered indicative of the magma genesis. In reality, the differences in terms used are very few. For example the paragenesis, or rather the collection of minerals present in the lava is almost the same and composed of plagioclase, pyroxene, iron titanium oxide and olivine.