Mount Etna grow through a succession of volcanic structures. Each of these formed apparatuses signified the birth of a real volcano. Following tens or thousands of eruptions it grew, ceased its activity and became eroded and destroyed by exogenous agents. Its remains were thefoundation of another structure with its own eruptive axis.

There are about ten volcanic structures defined as such, however lots more are probably unrecognisable as they are completely buried by later structures.

The larger structures include "Trifoglietto II" (from 70 to 50 thousand years ago) which must have reached a height of circa 2,400 m. This structure is currently completely dismantled. The beautiful side of "Valle del Bove" hosts pyroclastic rock that highlights its particularly explosive activity. Explosiveness is probably linked to the large quantities of water in the structure that on vaporising caused the magma to fragment. 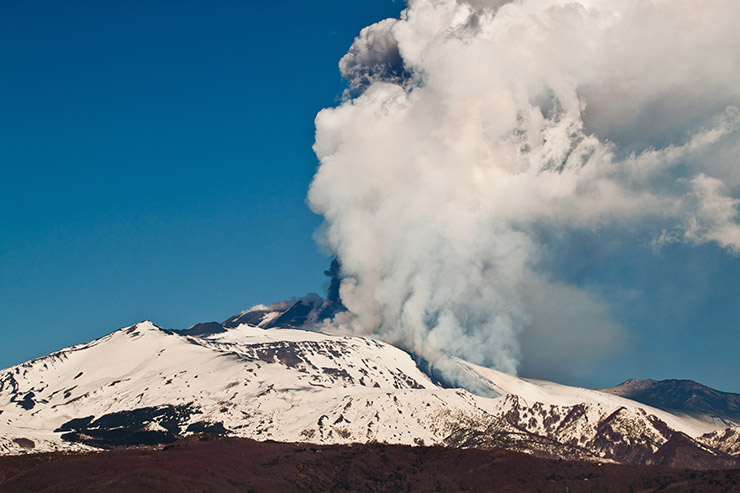 About 30 thousand years ago the eruptions moved towards the eastern axis, unlike previous eruptions, and the most important and impressive of the alkaline, volcanic structures began to grow and became known as the Ellittico. Its products, both lava flow and pyroclastic rock, form a structure of considerable size which, before the collapse of the caldera 15 thousand years ago, must have reached more than 4,000 m. Today, the Ellittico structure forms the morphological frame of Etna, even if it is seriously eroded. Among the products at the centre of the Ellitico we encounter the most differentiated terms of the entire volcanic alkaline series which covers a compositional interval which ranges from alkaline basalt (rare) to trachyte. The most significant apparatus products are found in the eastern walls of Valle del Bove, at "Punta Lucia" and "Pizzi Deneri". The name Ellittico derives from the elliptical shape (2 km major axis and 1 km minor axis) of the caldera which marked the end of its activity.