The modern period and present Etna in Sicily

The products ejected after the formation of the caldera on the plain form the “modern Mongibello” and include all the historical flows around Etna and the current summit craters. The products from the recent Mongibello were subject to a general transition in the most ancient and acidic terms (relatively rich in SiO2) to the more recent, basic (those relatively lacking in SiO2) and porphyritic (rich in crystallised minerals in depth before emission). 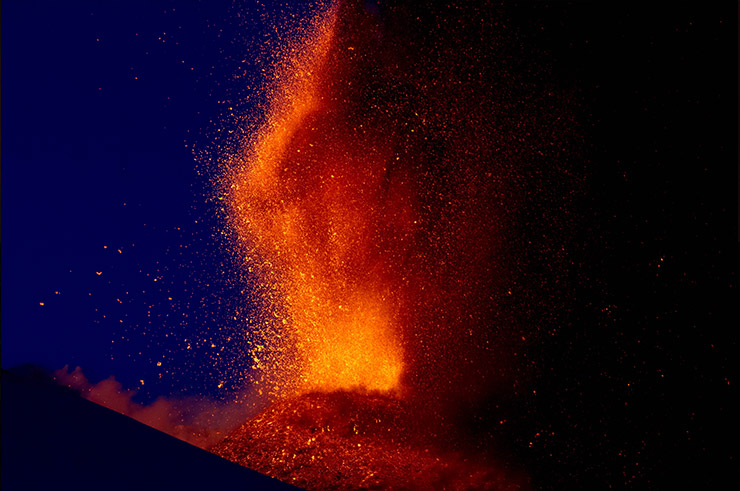 Mount Etna’s current eruptions are mainly due to product spurts rather than real explosions. The eruptions in the terminal craters (“central crater” which since 1969 has joined the “new mouth”) today are fairly rare, whereas eruptions in the sub-terminal craters are extremely frequent: the north east crater which developed as a degassing pit in 1911. Today, its height (3,320m) rivals that of the central crater; the south east crater (3,240 m) has been the theatre over the last few years of a series of lava fountains with sprays reaching a height of 1,000 m. 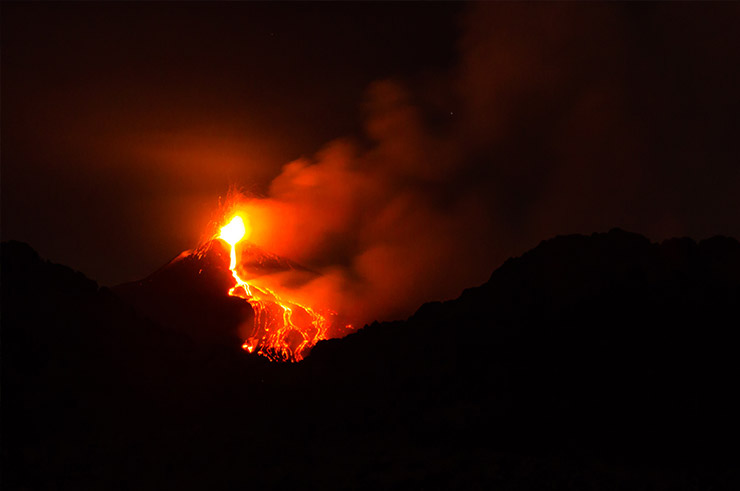 These explosions join the side shows of the secondary apparatuses and less frequently, eccentric eruptions. The temporary apparatuses are monogenic volcanoes, meaning they erupt once and are directly connected to the energy system of the main channels in the volcano. Etna’s sides are covered by about ten of these apparatuses, formed by cones of pyroclastic scoria and flowing lava. In some cases secondary apparatuses have ejected lava flows that have destroyed cities and villages, including the city of Catania in 1669. The Red Mountains secondary apparatus and source of this frightening flow are now covered by a splendid pine grove. The so-called “NE rift” redirects the many secondary apparatuses from the historic and prehistoric era on the medium-high north eastern slope.

The eccentric apparatuses have an indistinct morphological structure from the secondary apparatuses, but in this case we are dealing with emission centres with energy systems which are independent of the main channels. Naturally their identification is indirect and always dubious. Monte Moio is an example of an eccentric apparatus. According to some, the particularly intense eruptions from 2001 could have contributed from magma fed by an independent system, which would therefore be defined as eccentric. During this recent eruptive phase and immediately after in 2002, lava and the ejected pyroclastic products during the explosion were characterised by a common paragenesis amphiboles of lava from Etna, an inosilicate distinguished by hydroxyl ions in the crystalline lattice.