Your first impression when you see Etna by plane or looking at a plastic scale model is that it is a perfect volcanic cone with a huge piece the size of an entire slope missing, as if a huge dessert knife took away the entire eastern side of this huge mountain. What remains is a large depression, with an almost flat base, paved with historic and prehistoric lava eruptions. The valley is limited by a steep escarpment with a slope between 30° and 45°, with a height of more than one kilometre, often divided into long series of sharp crests and vast detritus channels. 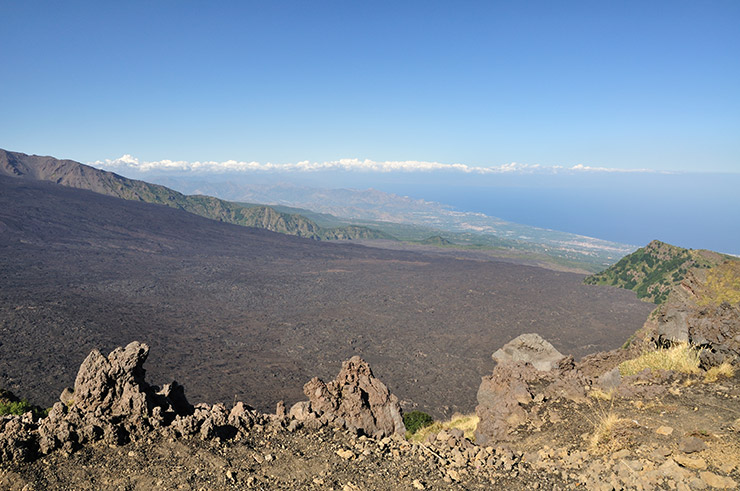 Valle del Bove is widest in an East-West direction at 7 km, with a length of 6 km in a North-South direction. Its plant borders have a "horseshoe" shape, with an open eastern side.

To the north, the valley is closed by a long wall measuring 200 metres high, known as the “Serra delle Concazze” due to the presence of numerous craters and minor depressions (huge troughs) on its side. The wall of Serra delle Concazze is uneven, with some detached minor “peaks” which are the top of some secondary crests and have an octagonal shape similar to the wall itself. The most significant are:

To the south the valley is limited by a wall that reaches 400 metres high, the “Serra del Salifizio” peaking at 2,640 m on the imposing pyroclastic cone of “Montagnola”, produced during the eruption of 1763. Serra del Salifizio, with its more easterly side known as the “Schiena dell’Asino”, is rather uniform and the only “peak” of importance is “Monte Zoccolaro” at 1,715 m.

Lastly to the east, or rather towards the summit craters, Valle del Bove is separated from the edge of “Piano del Lago” at circa 2,700 m high by a wall with more than 1,000 metres in height difference. The western wall is divided into numerous octagonal crests:

Along all the sierras in Valle del Bove there are wonderful pyroclastic and lava rock formations crossed by numerous dykes which are less susceptible to erosion. They protect the crests from erosion and give structure and support. 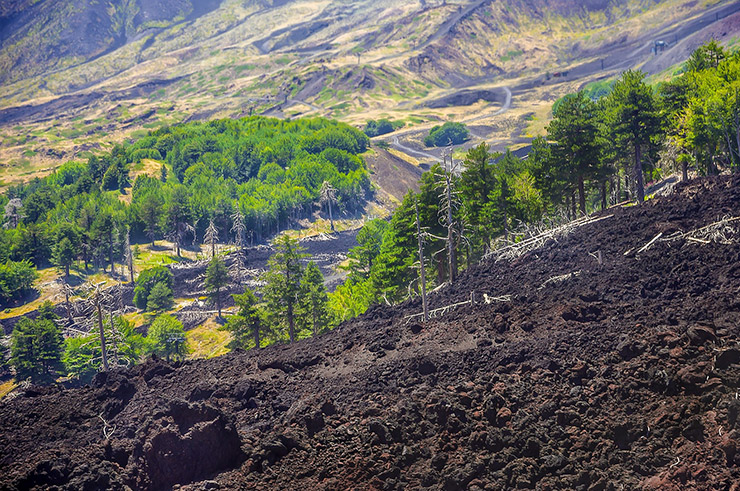 Valle del Bove has always been of great importance in understanding Etna’s history. The rock formations on the steep walls of the sierras allow us to study this volcanic sequence. The orientation of the dykes enable us to understand the tectonic links in the area around Etna through which magma surfaces The volcanic series found on the walls of Valle del Bove can be traced to various eruption centres, almost all of which are now eroded, with distinct eruptive axes and differentiated petrochemical products.

Geological studies have exhausted the study possibilities offered by the walls of Valle del Bove and have still to understand the details of its origin. It remains a mystery, as fascinating as a September dawn among the needles of lava.